Last weekend I found myself catching up with an old high school friend of mine whom I haven't really talked to since we both graduated and headed off on our own paths, exploring this new realm known as the "Real World".  We exchanged the ritual niceties that usually accompany a conversation with long lost friends: how's your family? where are you living these days? what’s new? etc... He asked me if I ended up going back to school.  Surprisingly to us both, I hadn't.

I told him that, in my taking two years off in pursuit of real-world experience, I had found a job and life style that has given me almost all that I could want out of life.   And now I have had to question the orthodox approach to success, and if it was for me.  I've always been a very focused person in one aspect or another, so for him to learn I had more or less dropped a lot of my pursuits in search of this real-world success had shocked him. I had peaked his curiosity, and after a loaded response like that, he just had to know…

"I've been working as a river guide for the past several years."

"A river guide? You mean like outdoor camp?" he asked.  It was clear he was unaware of such an industry and what all it entailed.  Throughout my time as a river guide, I have had many similar reactions from family, friends, and strangers when discussing what I do for a living.

"That's your job?!" he exclaimed in disbelief. 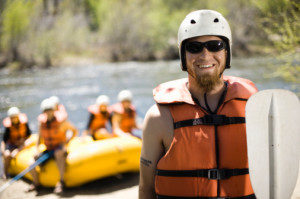 "Yeah man, it’s as crazy as it sounds. I get paid to take people rafting."

"That IS crazy! How did you end up doing that?", he asked.

"Yeah well I was in a funk.  The job at the gas station was killing me.  I needed something new.  Something that was gonna challenge me, mentally and physically. And I wanted to be outside more, doing something where I could feel the sun on my face."

I continued, "So one day I got off work, went home, and found a website that listed all of these outdoor professions.  It was there I found Raft Guide Training.  It caught me immediately: “Have you always longed for a job where you wake up excited for work every morning?  Where you spend the majority of your day immersed in nature alongside friends you'll have for life?”.  I was hooked.

Quoting the site, I went on, "Do you long for adventure, adrenaline, and have a capacity for entertainment?  Consider becoming a Raft Guide, the best job on the planet."

I could feel his anticipation through the other end of the phone, so I continued...

"The company was Raft Masters, a local outfitter that operates primarily on the Arkansas River in southern Colorado.  They have the reputation of operating with a high level of professionalism and have been churning out top-notch river guides since their founding in 1989.  The program they offer consists of almost 100 hours of on river training, double the requirements of the state!  And they teach almost anyone with a willingness to learn, from a variety of backgrounds, experienced or not!  They teach you everything!  From the basics of steering a raft and reading a river, to navigating technical class II and III rapids.  And eventually, if you stick around long enough…big class IV and V rapids that really get your adrenaline going!  All while leading and entertaining a crew of guests from all pockets of the country.  I jumped right in, signed up then and there, and have been in love with it ever since the first day of training."

"Wow, what a job!  That sounds AWESOME!  And now you get paid to do this?" he asked.

You could tell he wanted to know more.  "That all sounds good on paper, but is it really all its chalked up to be?"

"Yeah man!  Are you kidding me?!  It’s the best job ever…why do you think I’ve put the last 8 years of my life into it??  It all starts with the training program!  That’s what gives you the foundation to go and have fun with your friends on any stretch of water in the world!  It’s taken me all around the country and to faraway places like Australia.  I've seen my friends 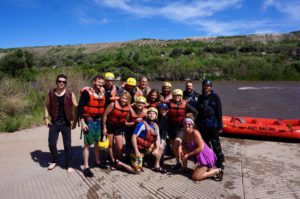 make it to places like Chile, Zambia, Costa Rica, New Zealand, Canada, Morocco and Switzerland just to name a few."

"Okay so what’s the catch? It’s like a million dollars, huh?"

"Not even close. For the amount of time and training they put into you…its dirt cheap.

"Wow!", he exclaimed, "Forget this restaurant gig. Where do I sign up?"

I laughed, "I knew you'd be into it! If you're serious it’s all on the website, RaftMasters.com."

"Of course I’m serious!  You just sold me on it.  That sounds amazing!"

Our conversation petered out, changing subjects from one thing to the next.  It was a joy catching up, and afterwards I couldn't help but reflect on my time spent as a river guide and the fateful decision I made to enroll in the training program that has since given me a lifetime of amazing memories.  And the joy that overcame me of knowing that at age 26, there are so many more memories to make before my time is through…